A car has become an everyday commodity for most people in today’s world. The automobile sector has increased considerably over the past few years. It is one of the sectors which is prone to the ever changing market conditions. The year 2014 had been tough for the automobile market in India. The slow economic growth coupled with high fuel prices and high interest rates deterred most potential customers leaving an impact on the overall sales i.e. affect car buying decision. All the ups and downs can be attributed to various factors which are usually the fuel prices, interest rates, excise duty, etc. 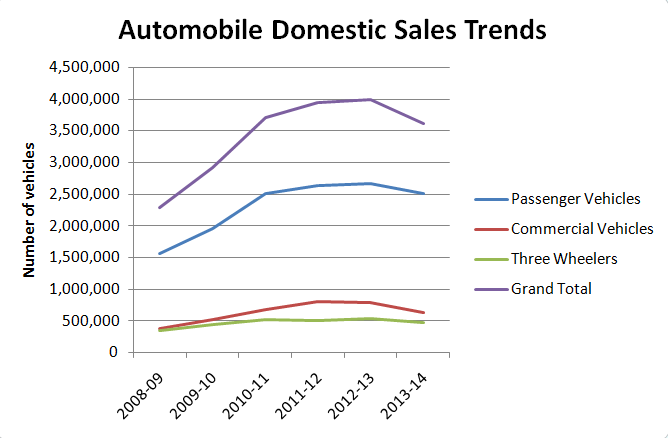 Source from data on

Fuel being the ever required commodity for every automobile creates a large impact on the demand of automobiles. Last year, global crude oil prices fell by 40% helping to lower the overall fuel prices in the country. The Modi government also timed the removal of diesel subsidies along with the global crude oil price drop. This led to the reduction in difference of petrol and diesel prices by 50%. Excise duty on fuel was hiked multiple times in the last and current year but the fuel prices held on to the declining trend.

The potential consumer’s decision is usually swayed by the price of the fuel. Hence, for quite some time, the market share was mainly dominated by the diesel variant of automobiles since it is cheaper compared to petrol. A changing trend is being observed where many consumers are switching over to the petrol variant models. According to a CRISIL report, the share of diesel cars was at 58 percent in the fiscal year 2012-13 which then reduced to 53 percent in the fiscal year 2013-14. This had further led big companies such as Maruti Suzuki to drop expansion plans for capacity of diesel cars. Bigger vehicles such as SUVs and sedans are now offered in petrol variants.

Crude oil prices have started rising again since last month and the effect is already being observed by the rise in the petrol and diesel prices just after the recent budget update. After the continuous decline for the past months, the hike is one of the biggest. The international prices for petrol and diesel have further gone up since this hike. If the new trend keeps up, the next fuel price review may further push the prices upwards. The review of fuel prices is done every fortnight.

CNG and LPG variants are also increasing in the market since they provide a much lesser cost per km as compared to traditional petrol and diesel cars. Cars with dual fuel systems are already available at a relatively higher price but the lower fuel costs make up for it in the long run.

As per a Business World report, “Over 80% of the vehicles purchased in India are purchased with financing from banks and other institutes”. With financing being required for every 4 cars out of 5, interest rates make a big impact on the demand of automobiles. It determines if the potential consumer will be able to meet up with the monthly EMIs or not.

Demand falls with rising interest rates. Lower demand means that the company has to reduce the supply which increases the overall manufacturing costs. This in turn causes the prices of the finished product to go up putting the manufacturer under pressure to maintain the final price.

Even the excise duty is making its impact felt since Finance Minister Arun Jaitley decided to remove the excise duty cuts in January 2015 which was implemented by the UPA government in February 2015. As per Business Today, “The resultant excise duty hike has translated into a 4-6 per cent price increase across passenger vehicle categories, affecting demand.” The automobile industry was hopeful about the extension of the excise duty cuts but the government decided against it. As per NDTV, SIAM (Society of Indian Automobile Manufacturers) president Vikram Kirloskar quoted that if excise duty on automobiles is kept untouched auto sales would see an on-year growth of around 3 per cent during the calendar year ending December 2015. However, if Mr Jaitley decides to cut it later this month in the Budget, auto sales could see a 7-8 per cent growth. Also, Mr Jaitley has increased the customs duty on commercial vehicles from 10% to 40% in the recent union budget of 2015 which feels as a major setback.

Overall, even with the drawbacks, the future for the automobile industry looks good with the fall of global crude oil price and the expected lower interest rates on loans allowing for more affordable EMIs. The industry is expected to grow at a better rate this year as compared to the previous one.