Imagine you’re streaming your favorite show in HD, and suddenly that frustrating buffering circle arrives at the screen, or maybe the video quality falls two-three bars. We’ve all been there. You have a fast and expensive internet connection, but every now and then, the speed drops, and you’re just mindlessly staring at the screen.

It’s rather surprising that 2021 was supposed to be the year of flying cars, and here we are still talking about internet speed. Most households spend an average of $50/per month on their internet connection. But still, they’re not getting an uninterrupted connection speed as most ISPs promise to their subscribers.

The truth is, even if you spend a ludicrous amount on your internet connection, you’re still most likely to face those speed bumps every now and then. So, why is that? Is your ISP doing it on purpose? Yes, and it’s called bandwidth throttling.

Please keep reading to learn more about it. 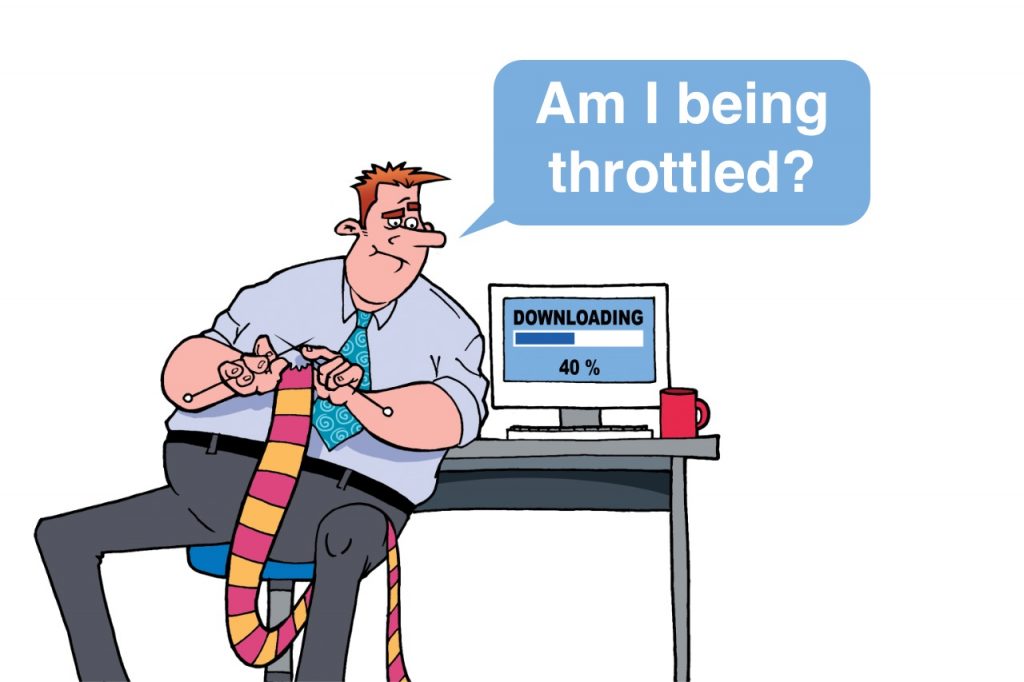 What is Bandwidth Throttling?

Bandwidth throttling is when your internet service provider (ISP) intentionally slows down your connection speed. It can happen when you’re normally browsing the internet, streaming specific content, or even visiting certain sites.

There’s no specific time or rule for bandwidth throttling. So you’re basically at the mercy of your ISP, even though you might be paying a hefty subscription fee every month. It’s a common practice in the networking world to regulate network traffic and minimize bandwidth congestion, but it’s not always ethical.

Bandwidth throttling goes against the principle of net neutrality, which states that every ISP must give equal treatment to all consumers over the internet, regardless of the content, user, platform, application, or device.

But is it Illegal? Unfortunately not. There’s no law or guideline to regulate bandwidth throttling. But, in some cases, it’s necessary because throttling helps ISPs prevent streaming sites from crashing or ensure a stable connection for everyone when the server faces any issues.

But when internet throttling happens frequently, there’s no justification for it. Throttling doesn’t only occur on broadband services. It’s actually more frequent on mobile data connections. You might be happy that you got a great deal on unlimited monthly data. But your sim operator is actually slowing down your connection speed once your data usage reaches a certain limit.

There’s no guideline or rule book for throttling. It could happen for a lot of reasons. For example, your ISP could be slowing down your connection speed when there are too many users on a specific site at the same time. Or, it could just be because you’ve reached your data cap or usage limit.

Let’s look at some of the most common reasons your ISP throttles your internet connection and slows down your speed:

When there’s heavy internet usage in the same area, your ISP might slow down the connection speed in your area to ensure that other users in a different area are able to enjoy a stable connection.

It could also happen only on specific websites. For example, when a website gets overcrowded with users from the same network, it can often crash, or some content might become unavailable. To prevent this congestion, ISPs often limit your connection speed when visiting certain sites. This is especially the case for live-streaming websites.

As we’ve discussed previously, “unlimited” plans aren’t always unlimited. There’s almost always a hidden data cap that your ISP decides. In addition, if your internet usage exceeds a certain amount before the end of your billing period, the ISP might throttle your connection speed.

In many places, ISPs are allowed by the regulators to limit access to certain streaming services. For example, if you’re living in Australia, you’ll see that most ISPs slow down your connection speed whenever you’re viewing content on a free streaming platform. Their effort is to ensure that major paid streaming platforms gain more users than free pirated streaming platforms. Regardless, ISPs shouldn’t deprive you of any parts of the internet for reasons totally unrelated to you.

How to Stop Bandwidth Throttling?

By now, you must be thinking, “Am I being throttled, and how to stop it?”

The easiest way to tell if your internet speed is being throttled is by running a speed test. Run a normal speed test first, and then run it again with a VPN connection.

Here are some of the best ways to stop bandwidth throttling: