Around the 1970s, video games came into existence, and now they have become a part of every child’s life. A video game is a game that one plays on an electronic device like a mobile, TV, or computer. From that time, everybody is discussing the pros and cons of video games.

Ralph H. Baer, also remembered as the father of video games, started the journey in 1967 when he launched the first multiplayer, multi-program videogame console called ‘The Brown Box.’ Many companies have begun the video games business after him and created some famous good and bad games. Here is an interesting infographic about video game console history.

Many of you must have seen children from different age groups sticking to the screen of mobile phones or TV playing games for long hours instead of going out or completing their homework.

When their parents ask them to go out to play or completing their homework, all they do is ask for a few more minutes for playing, which turns into hours. It can be devastating for any parent to see their child spending so much time in front of the screen when all they hear is these activities are unhealthy for their growth.

But are video games bad for you, or are there any positive effects of video games? Just like everything else, video games also have two aspects, good and bad. We will take a look at both opinions, i.e., the pros and cons of video games.

Reasons Video Games are Good for You

The age of video games started with a simple game, but now we have different types of video games available in the market, which are even more complicated and sometimes violent. Some of them are good, while others are just bad games.

Parents find video games as a worse way of wasting time in front of computers and TV screens. Some of the experts found that video games damage the brain. Researches show that certain video games can improve eye-hand coordination and also increases mental agility.

It is commonly believed by some psychologists and scientists that video games are good for you – among them, the main one is making children intelligent. Video game enhances the thinking level of children that they can use in their future. As we discussed, today’s games are more complex.

They include using different kinds of buttons on the controller, which allow kids to think quickly and respond to their reflexes. It will enable kids to make fast connections between what they see and how they respond by using their fingers.

There are many benefits of video games, including psychological, physiological, and academics, as well. In this section, we will shed light on why video games are good for you.

Researchers have conducted studies to know why video games are good for you and their impact on children’s minds. This question’s answers include learning team spirit, planning, memory, and many more skills.

Video games can help players manage restricted resources and let them decide the most effective way to use them. They can apply the same method in the real world, as well. The Americans planning Association (the trade association of urban planners) and Maxis (the sports creator) have claimed that SimCity encourages its players to create a career in urban planning and architecture.

Analysis has shown that teens can learn abstraction, visual, and eye-hand coordination skills from video games, mainly from shooter games. Some games need an excellent deal of those skills to achieve success.

For example, players ought to keep track of positions, speed, aim, directions, etc. In doing this, the brain acknowledges every situation and acts while coordinating with the hands using a keyboard or game controller.

Angry Birds are the types of video games that bring instant happiness and improve moods. It also teaches the child that failures are also a part of the game and life.

Our brain creates new neural pathways and transmitters and develops a specific structure when we use the same skill numerous times.

When the child focuses on something intensely, the brain puts itself in a more responsive position, which may ultimately help analyze real-life problems.

Some video games need children to manage multiple operations at an instant. It improves multitasking skills in children.

In city-building games, the children will use their creative skills to build their city where an unexpected enemy can emerge at any time, surprisingly. It will force the player to be resourceful and learn to act quickly.

Incredible Machine, Angry Birds, or Cut the Rope are the types of video games that train the mind of a child to seek out alternative ways of solving problems in a short time. Researchers suggest that video games help in developing problem-solving skills.

A child’s mind becomes more active during solving a problem while enjoying it simultaneously.

Youngsters or teens, who have played video games that involve more puzzle-solving activities, tend to be more intelligent and have more active minds than others from the same age group.

These kids have a sharp memory, above-average IQ, and a better approach to small details. These skills help in performing better in their studies.

Motion-controlled games, such as the Nintendo Wii, were once thought to be the solution to parental issues regarding video games resulting in obesity. However, studies have shown that these video games alone don’t increase kids’ overall activity level.

There’s some hope with the games that encourage youngsters to go out of the house. Pokémon Go is one such example. The youngsters can also prefer real-life treasure hunting activities like Geocaching. The fitness apps, like the Walk, combine storytelling and exercise to induce players to move.

The FAS or Federation of American Scientists claims that youngsters should be encouraged to play more video games. It will make them perform better in the current competitive job market. In a report revealed in 2010, the FAS claimed that video games help children learn higher-order thinking skills like drawback resolution, interpretative analysis, etc.

Many video games, such as flight simulation, give players the real experience of flying an aircraft. It lets the player take off the flight, land the plane and operate all the controls, such as adjusting speed, wing angles, altimeter, etc. The players, while playing these video games, feel like they are flying aircraft for real.

11. Operating Along as a Team

The types of video games involving two or more players encourage your kid to learn teamwork. The child learns to listen to his teammates, make decisions with the group’s approval, respect others’ opinions, and distribute tasks supported with skills. Some online games even involve international players, which will introduce your child to various nationalities and cultures.

There is a research paper of Radboud University Nijmegen published by Isabela Granic, Adam Lobel, and Rutger C. M. E. Engels. You must go through it and learn what they researched in late 2013 about video games.

Why Are Video Games Bad for You?

Video games are very famous among children of all age groups. We have discussed the pros of video games and knew how video games positively impact children, but we also know that the excess of anything is harmful. Therefore, it’s time to explore the cons of video games. Hereunder we are going to discuss the negative effects of video games.

Video game enthusiasts spend about 3 billion hours per week in front of their TV and computer screens. Due to the increasing abuse of video games, youngsters are suffering from some significant issues.

The World Health Organization in 2018 declared the addiction to playing a video game as a gaming disorder, which is a kind of psychological state disorder. A study National Institute on Media and the Family suggests that video games are addictive for youths, and this addiction will increase their depression and anxiety levels. Warning signs for video game addiction include:

Many scholars from the American Psychological Association (or APA), given the game’s violent nature, claimed that there’s a ‘consistent correlation’ between violent video games and aggression.

They said that these types of video games leave an emotional impact on children even when the game is over, making them commit a crime at a young age. The bad games encourage and reward players for showing violence in the game. The player experiences act of violence, such as killings, kicking, stabbing, and shooting in the game.

These types of video games can make children insensitive towards these acts. It can encourage the child to show aggressive behavior in real life and do criminal violence as well.

Taking part in an excessive amount of video games make youngsters socially isolated. They lose interest in alternative activities like reading, learning, doing homework, and interacting with their family and friends.

If you scold or stop them from playing video games, they’ll begin to seek other ways to play them. They will lie to you and start hiding when they want to play games without your knowledge or approval. They may also make excuses to let them play video games only for a few more minutes.

The poor performance in academics is one of the significant side effects of video games in children. A study conducted by Rideout, Foehr & Roberts in 2010 on American children addicted to video games showed that approx. 47% of heavy video gamers got a lower GPA (Grade Point Average) in academics. In contrast to those, 23% of children who spend comparatively less time on games perform better in studies.

Some studies conclude that video games increase concentration, but other research revealed in the Science of Standard Media Culture (2012) that bad games hurt children’s ability to concentrate. It may enhance focus for a short period, but the excess of playing video games damages permanent concentration.

Continually looking at the electronic screens can lead to strain in the eyes because the cornea, pupil, and iris don’t have any biological protection to save our eyes from exposure to digital screens.

Video games affect the ability to pay attention while doing other activities. It can lead to headaches, nausea, vomiting, and dizziness in severe conditions, resulting in weakening eyesight. 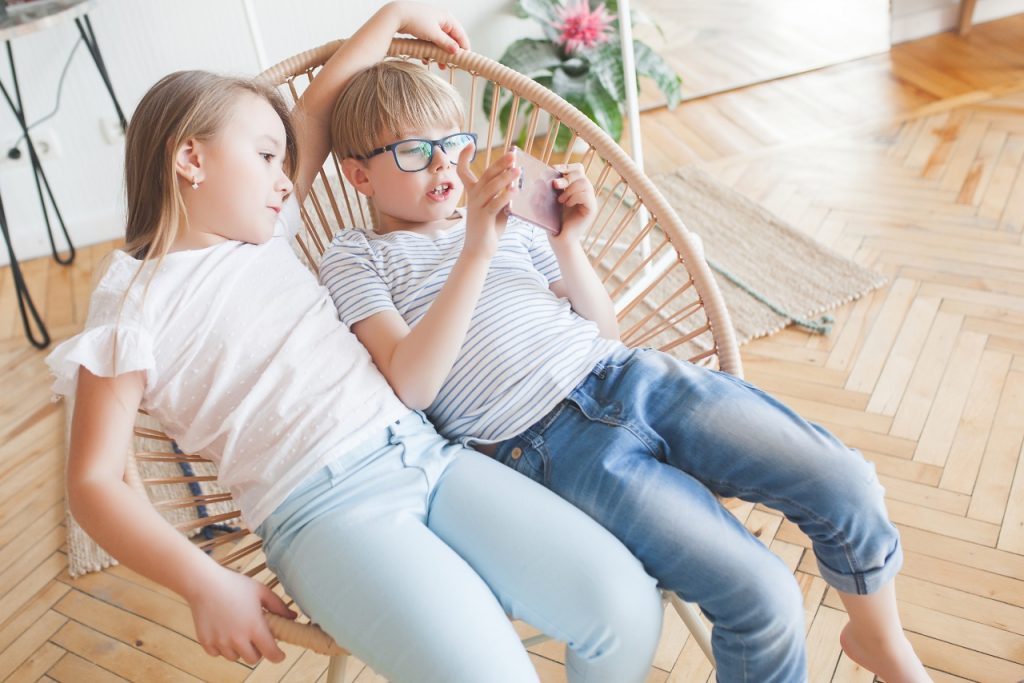 There are many adverse effects of spending too much time playing video games. They not only include psychological effects like becoming anti-social, but they also give rise to much physical illness.

Spending more time sitting in one place and playing video games for long hours can reduce children’s physical activity. This lack of physical activity can result in obesity and the weakening of the muscles and joints.

It makes hands and fingers numb, over-sweat, and deterioration of sight in the adverse condition.

The children spend all the money they earn in a part-time job or get as pocket money to upgrade the software or purchase different in-built features to level up their game. They become unconcern about the usage of money and saving. It can affect them financially in the long term.

Children who are addicted to video games forget everything when they play a game. The game limits the time for sleeping, bathing, eating, and studying.

Due to this, these children cannot manage their time between different activities and are left behind or perform poorly in everything.

The children can get confused in distinguishing between reality and fantasy. It can lead to repeating online gaming behaviors in the offline real world. The video games like Grand Theft Auto, Manhunt, and Call of Duty are considered bad games as they can lead to the practice of risky behaviors like rash driving, drinking, smoking, etc.

However, bad or violent games can make children careless, teach immoral behaviors, reduce the ability to concentrate, invite health issues, etc. Video games are good for you unless it has not turned into an addiction, and you are not using them excessively.