People invented technologies to make life easier. But who could think that they’ll go so far and place a whole smart house “controller” in a small chip? Well, that’s only the beginning. Today we are going to speak about Embedded systems and SoM.

SoM stands for System On Module, which is a small embedded computer system plugged onto a carrier board. The module houses all necessary functional parts, such as the CPU and graphics unit, a working and program memory, clock and energy management, and a number of connection ports, like WiFi, Bluetooth, USB, etc. An SoM’s modular design makes it excellent for integrating end systems, such as robotics and security cameras. 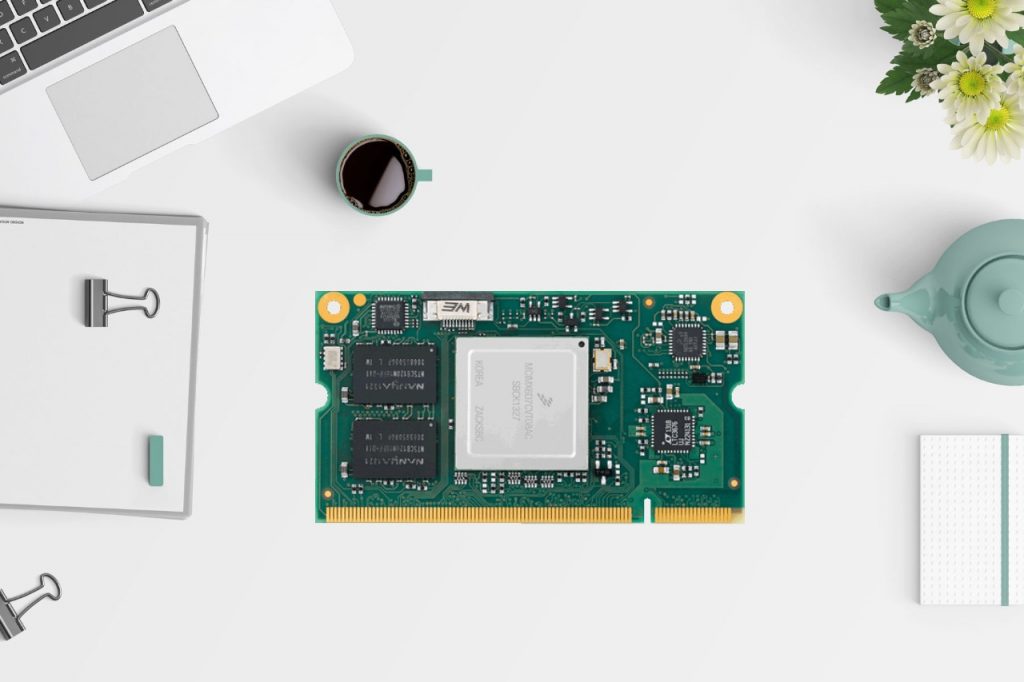 What Is An Embedded System?

An embedded system is a hardware/software system based on a microprocessor or microcontroller that performs specific functions within a broader mechanical or electrical system. Digital watches and microwaves are examples of embedded system use, as are hybrid automobiles and avionics. Embedded systems account for up to 98 percent of all microprocessors produced.

How Does an Embedded System Work?

You may be familiar with microcontrollers or digital signal processors (DSP), application-specific integrated circuits (ASIC), field-programmable gate arrays (FPGA), GPU technology, and gate arrays. They are all used in embedded systems. These processing systems include components for dealing with electrical and mechanical interfaces.

Programming instructions for embedded systems, also known as firmware, are stored in read-only memory or flash memory chips and run on computers with limited hardware resources. Peripherals connect these systems to the outside world, linking input and output devices.

How Is It Built?

The following components make up the basic structure of an embedded system:

Why Were SoMs Created?

In a world where everything is being unceasingly digitized and the demands of users grow for even more powerful yet smaller embedded computers, the complexity of SoM systems is continuously expanding. To make this development more user-friendly, major semiconductor makers incorporate more functionality into the chips system (SoC).

The companies who make SoMs are to place the critical timing of the high-speed components and the very high number of connections in the smallest possible space.

Why Do You Need To Use SoMs?

SOMs enable developers to do the seemingly impossible, cutting time-to-market and lowering costs. Developing an embedded system is often a lengthy process that necessitates the design and fabrication of a bespoke board. An SoM simplifies the stages involved in bringing a design to life. Select an SoM that meets your requirements, integrates it with your end system, and you’re ready to go. In addition to allowing for high volume deployment, it also supports module-based designs that simplify product life cycle management and lower bill of materials (BoM) costs.

What Are The Benefits of SoMs?

The term “time to market” refers to the time it takes from product development to launch. Only costs are incurred during this phase, and no sales are earned. As a result, it’s critical to keep the phase as brief as feasible.

This is the most notable benefit of a module-based architecture. The rapid availability of a computer module and accompanying software allows for a quicker development phase in hardware and software design.

It’s a pleasant, not insignificant side effect to be able to save time and money. In addition, an SoM typically reduces the complexity of the carrier board’s layer structure, resulting in additional development and cost savings.

Furthermore, the user has the freedom to choose from a variety of processors in the SoM series. This can be utilized to do processor upgrades or downgrades with suitable systems on module series.

What SolidRun Suggests For SoMs

SolidRun released their latest system module-based NXP’s i.MX8M Plus system on a chip. With i.MX8M plus, they expanded their system on a module concept to provide as much functionality on that same little board as possible. For instance, you have the cortex a 53, 1.8 gigahertz quad and quad variants up to eight gigabytes of Lpddr4, supporting optional ECC. Besides the features with the standard boards, SolidRun supports, this one also has 802.11 ac wireless and Bluetooth 5.0.

The i.MX8M Plus SOM is ideal for industrial IoT and HMI applications, with mega high-speed interfaces like 2 x Gigabit Ethernet, TSN, PCIe Gen 3, USB 3.0, and CAN-FD capabilities, as well as an industrial temperature grade and NXP’s durability program.

Developers may quickly scale up or down between SolidRun’s i.MX8M series, including the i.MX8M / i.MX8M Mini/ i.MX8M Nano, using the i.MX 8M CoM products. Pin compatibility and common software resources allow designers to create future-proof solutions for high-performance and low-power applications in a flexible and forward-thinking way.

SolidRun’s i.MX 8M Plus CoMs are more minor, yet they still have all essential subsystems and connectivity options for consumer and industrial IoT and small edge applications. You can also utilize them in applications that require passively cooled devices and are well suited for various situations.

We hope that you are as excited as we are about the development of technologies. So check out the iMX8M series SoMs and stay tuned to learn more with us!