Apps are big business. In 2018, Apple CEO Tim Cook announced there were 20 million registered developers on iOS who at that time had made around $100 billion in revenues from the App Store’s 500 million visitors per week. But not all apps are successful, which is disappointing for the teams that put in a great deal of effort to build them.

Before you ever download a new app to your device, there are people behind the scenes who have come up with the concept, convinced funders that it can generate revenue, created prototypes, developed the design and programming, engaged QA services for testing, and launched it into the marketplace. Let’s take a peek behind the scenes of all these steps. 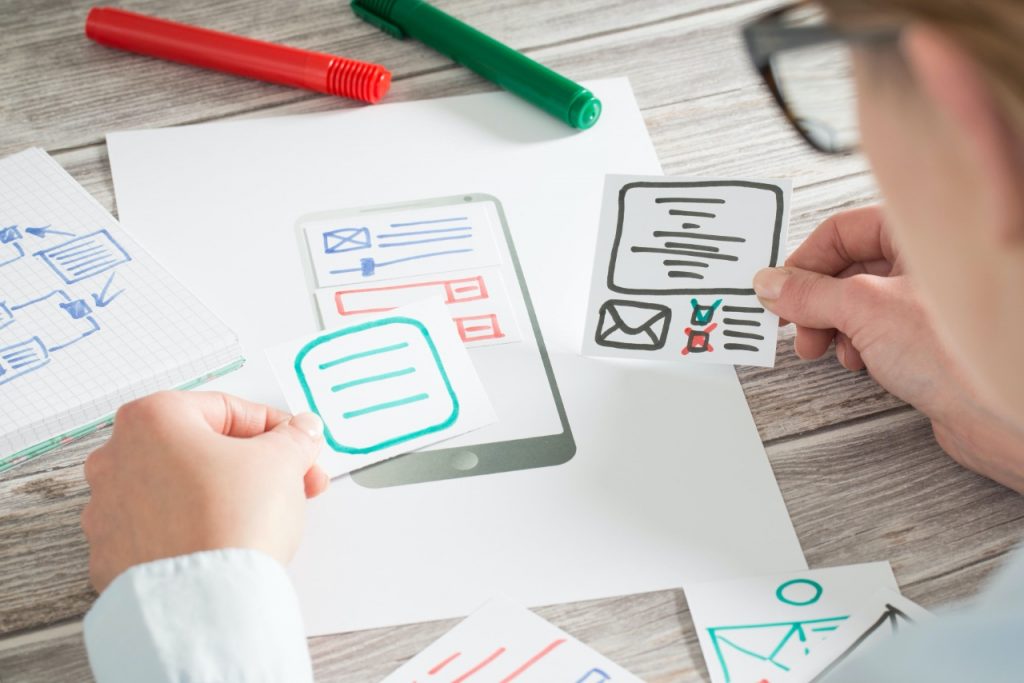 App ideas can come from many places. A service company may need a way to communicate with and push notifications to employees. A retail store may need an app to provide convenient online shopping. An entertainment company may come up with a new game. A nonprofit organization may want to create an app to make accessing services easier for clients.

The objectives and audience for each of these ideas are different. But the people generating the ideas should be clear about both. For example, with a game, the objective is entertainment. But, who is the audience? Is it pre-teen boys? Middle-aged women? Serious gamers? Such considerations will drive additional decisions throughout the app development process.

At this early stage, idea generators are also thinking about what features the app should have, how it will be different from others like it, which platforms it will operate on, when they want it to be ready for distribution, and how it will be maintained once it’s in the marketplace.

One of the first steps in the design and development phase is wireframing, which is the process of creating a “blueprint” for the app. It includes all the features the app will have so everyone involved can make sure these functions flow well together.

Next comes the user interface (UI) and user experience (UX) design. This part is essential for ensuring that users find the app easy to operate. This phase also involves decisions about the “look and feel,” such as the color scheme that will be used, and the style of buttons. Here you can begin to see exactly what the app will look like in its completed state.

Development is also critical, as it’s the process that makes the app function. This phase might include discussions between developers and “idea people” about exactly how the app should operate. Developers use technologies and programming languages specific to the platform (such as Android or iOS) they’re designing for.

Testing is critical for ensuring the app works properly and does everything it’s supposed to do. Testers may be part of the development team, or they may be hired externally, providing an added layer of objectivity. Testers perform a variety of tests.

Functional testing ensures each function of the app does what it’s expected to do. Testers may also ensure the UX component of the app is sound, compare the app to similar ones already on the market, try to “break” the software to detect any flaws in the programming, try the app on different devices, and incorporate feedback from initial users.

Testers give feedback to the designers and developers, who adjust the design and the code accordingly. Additional testing rounds may be needed before the app is considered complete.

Some development groups may do a “soft launch” prior to the actual launch. In this type of launch, the app is tested by a small group of people (perhaps only those on the development team) to identify any problems that may still exist following the testing phase.

Finally, if the app is meant for an internal company or organizational use, it’s made available to employees. If it’s meant for customers or clients, it’s distributed to an appropriate website. If it’s meant for public use, it’s uploaded to appropriate sites, such as Google Play Store and Apple App Store, which together are where the vast majority of users go to download apps.

The development or marketing team implements a promotional plan that involves social media, ads, and other marketing tactics to get the word out about the app.

Post-development work may need to be done, so teams need to be available to address any issues that come up. This phase is critical because users base app downloading decisions partially on reviews and reviews may be based on how well developers respond to update requests.

Given that the app economy will be worth $6.3 trillion by 2021, it’s not likely app developers will be slowing down. Look for many more great app ideas, no matter whether your interest is communication, health, games, finance, productivity, travel, or your own favorite thing.