Android users continuously complain about the degrading performance of their device after a particular phase of time. As their smartphones start getting older with passing time, the performance of their devices starts growing weaker. The most significant impact is observed in the battery life of the smartphone. Most of the users complain that their phone eats up too much of battery.

The most common discrepancies related to battery life that could be observed are low battery usage, an increase in battery discharge, and longer charging periods. Users often complain that despite proper phone usage & charging care, their phones are only found degrading over the passing time. The DU Battery Saver app had been launched by DU Group to overcome this critical problem in most of the Android devices. It is the world’s leading battery saver app that has helped its global users to save battery around 59280Kwh. Just a single tap, and you can save your phone’s battery up to 70 percent. If you wish to recharge your smart phone’s performance, then you must install the DU Battery Saver application from Google PlayStore. The app is available for free. Once this app is installed, it will take charge to improve your phone’s battery performance.

Many people, who have gone through DU Battery Saver Review, have said that the app has an authentic ability to identify the elements in a smartphone that are eating up phone’s battery or are demanding high battery consumption. The app further cleans these elements, hence optimizing battery performance. It is a highly customizable application that every Android user should have on his/her smartphone.

The home screen interface allows the user to navigate through the battery details screen. This screen gives a detailed synopsis of battery consumption used by different apps on the phone. The measures of consumption are mentioned in hours and minutes. It helps the user to understand which features of his/her phone are consuming more power.

Its users love the user-friendly interface and simplicity of this app. Most of the DU Battery Saver Reviews compliments the friendly interface of this app. ‘Monitor’ option showcases the user as an accurate display of different phone features that are running on the user’s device and simultaneously are consuming the phone’s battery life. This feature even permits the user to exterminate any of the application that is running unnecessarily on the phone and consuming its battery life. Users can stay informed about each app that is consuming the battery and can decide over the existence of that app on his/her smartphone.

The welcome screen of this app displays valuable information related to the device of the user and its present battery status. A graphical view of the current battery status, operating time remaining, and charging time left is shown to the user so that he/she can twig the use of the phone accordingly. The battery consumption could also be optimized through the ‘Optimise’ option, which permits the user to exterminate apps consuming too much battery life. This screen will also reveal the CPU temperature, battery type, and voltage of the device. 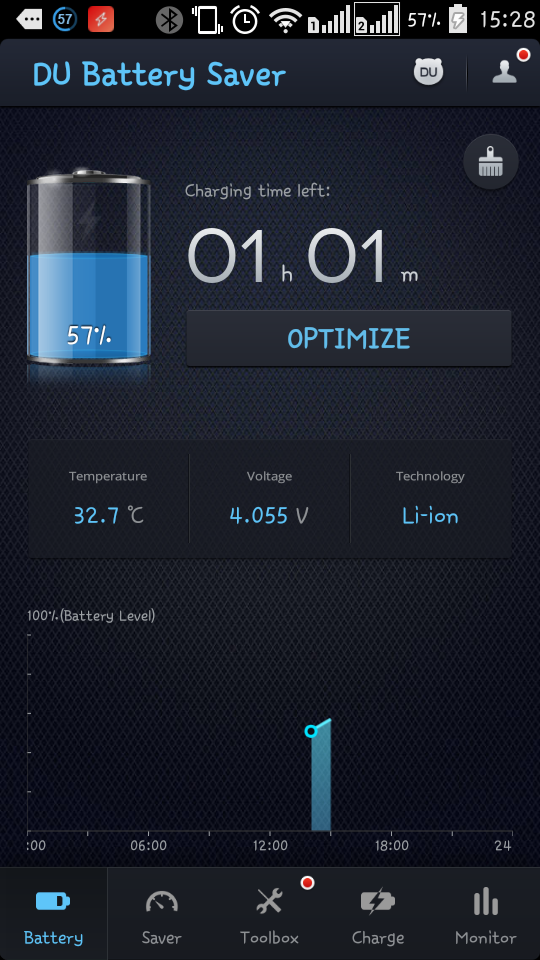 DU Battery Saver app also permits the user to keep track of application usage. The ‘Profile View’ option can be accessed by the user to check his/her app notifications in message form, device information & details, access few DU features and check the number of DU coins earned. DU Swipe and the App Lock feature can also be accessed. User’s achievements are also displayed on the phone’s screen by use of this feature. These achievements are specially designed to improve user experience and make it reach the next levels. The results can be – battery skins collected, smart features unlocked, and healthy charge.

‘Saver’ feature of this app provides 2 different modes to its users. Users can select the operation of messages, calls, and network while working on his/her phone. DU Battery Saver Pro offers a ‘Smart Mode’ that can be used for enjoying extra added features like Screen Lock, Phone Cooler, Auto Clear, and many others. 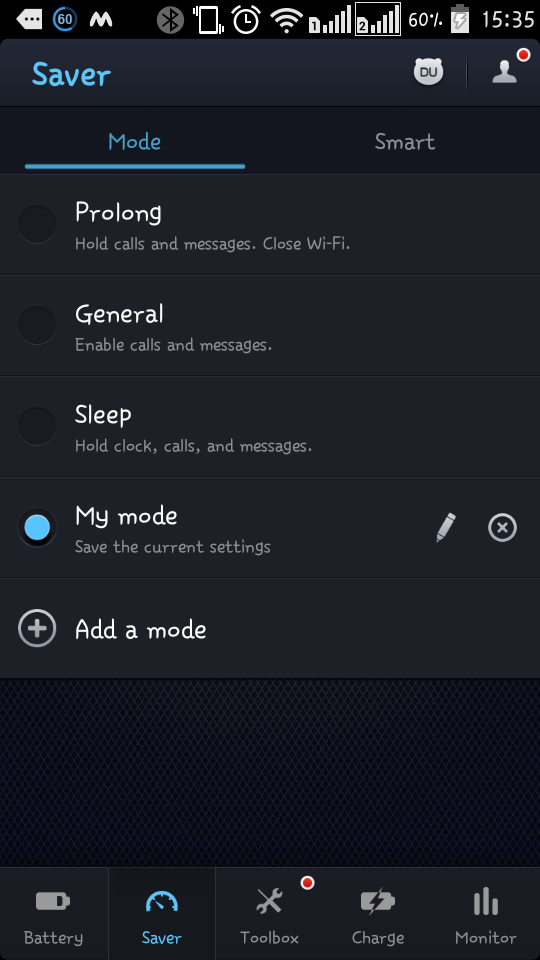 The ‘Extensive Settings’ feature helps the user to gain the most benefits from this app. The ‘Notification Setting’ option in this menu can be used for enabling/disabling the notifications. It even permits the user to select how this app will work in the background. The behavior of most of the apps can be controlled through the Extensive Settings feature.

‘Charge’ is one of the most advanced features of the DU Battery Saver app. The user gets a complete graphical view of present battery life status and the battery life that is remaining in percent. The user can even choose from 3 different charging modes that are – Trickle Charge, Full Charge, and Fast Charge. These 3 modes are useful in modulating the current flow at different stages of charging, and this results in the optimization of the charging process & gives a healthy charge to the smartphone. ‘Calendar’ option on the common screen lets the user track all the days on which he/she charges the smartphone under different modes. 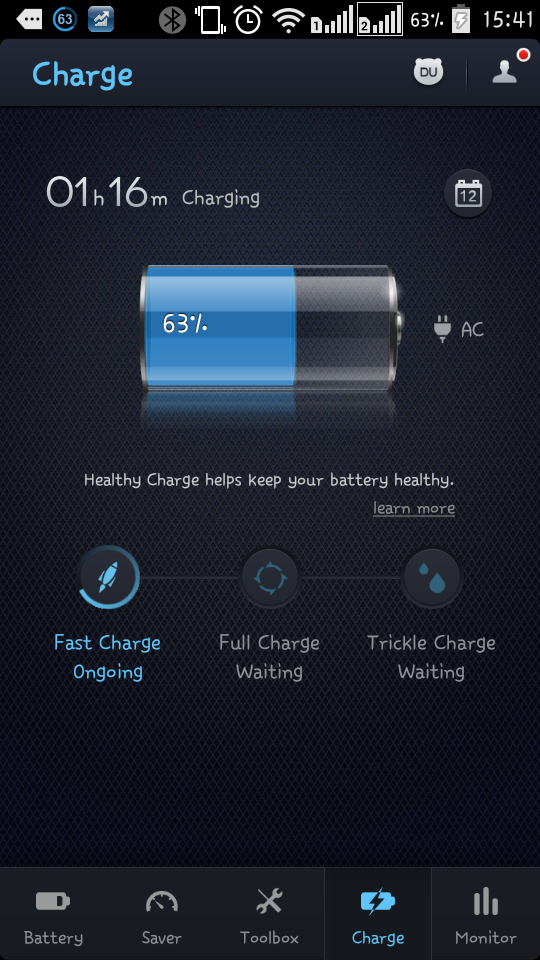 The average heating of the phone’s CPU when in use is about 63℃. If left unchecked, it can damage the hardware of the phone. The phone more cooling feature of this stunning DU Battery Saver app helps the users to cool down their phone’s CPU up to 37℃, which is comparatively safe operating temperature.

DU Battery Saver app has several benefits for Android users. Most of the android users complain about degrading battery life and performance of their smartphone with time even after they take the utmost care of their phone. This stunning application makes it easy for Android users to give a boost to their phone’s battery life and enjoy improved performance of their device. More than 15 million people had already downloaded this app from Google PlayStore. If you haven’t, it’s still not late. Download this app now and utilize all the benefits.

You can even go for the pro pack if you love the free features of this app. The PRO version of this application claims to optimize the battery life and device performance up to 70 percent, which is 20 percent more as compared to the free version. So, start using this app and feel the change.