The internet signals transmit via telephone, twisted pair, coaxial, and fiber-optic cables. The choice of medium depends on the existing network infrastructure and financial reasonability. Each option has its data transmission standard. DOCSIS is one of the standards. According to it, data transmission is carried out via deployed television (coaxial) cables. Often you can see a digital value next to the standard. It stands for the version of the technical specification. Versions differ from each other in terms of network organization, and for the user, the main difference is the speed of the internet.

It is the era of the Gigabit Internet, but more than 90% of the US is currently connected to coaxial internet, and only 25% have potential access to fiber-optic cable. It looks like we’re still there. However, since the end of 2015, some of the existing cable connections have seen major speed improvements (a few gigabits per second!) by simply replacing a few pieces of equipment – no new wiring is required. This standard, DOCSIS 3.1, has been in place since 2013, but with the increasing number of ISPs updating their equipment, it is possible that in a few years, most users will not have to wait until the actual fiber reaches the speed of the fiber.

Recently, CableLabs has provided technical documentation for the DOCSIS 4.0 standard, let’s take a look at this technology in our article too- 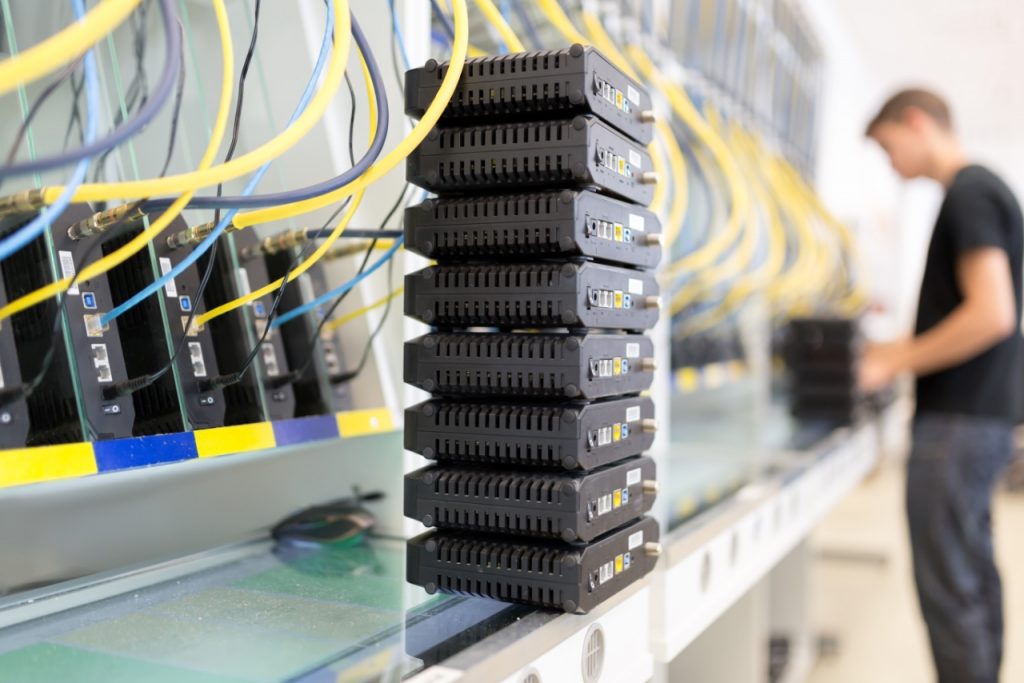 Data Over Cable Service Interface Specifications (DOCSIS) is a standard for data transmission over coaxial (television) cable. In 1998, an ITU working group in Geneva endorsed the fundamental standard J.112, which defines the methods of data transmission over cable television networks. Based on ITU standards J.112 and J.83, a single international standard is known as Data Over Cable Service Interface Specification (DOCSIS), was developed by a consortium of CableLabs in collaboration with a wide range of equipment manufacturers.

This standard provides for the transmission of data to the subscriber over a cable television network at a maximum speed of 42 Mbit/s. (with a 6 MHz bandwidth and 256 QAM multi-position amplitude modulation) and data acquisition from the subscriber at a rate of up to 10.24 Mbit/s. It is intended to replace the previously dominant solutions based on proprietary data transfer protocols and modulation methods, which are incompatible with each other. It should guarantee the compatibility of equipment from different manufacturers.

ITU documents also contain three applications that take into account the specific features of the US, European, and Japanese CATV services markets and the standards used in these regions (NTSC, PAL, SECAM).

How Does DOCSIS Work?

The standard of clients’ connection to the network via coaxial cable uses a downstream channel, i.e., it is carried out from top to bottom.

A standard cable TV channel is used for data transmission (Internet and multimedia services). A cable modem is connected to the user’s computer via a USB port or a network card, which, like a TV, connects to the cable TV network. After connection, the cable modem determines the channel through which data can be transmitted, connects to the CMTS (Cable Modem Center) installed at the KTV Operator, which has an Internet connection, receives an IP address, and allows the user to access the internet or other services offered by the operator. The cable modem receives a digital stream of information transmitted via the cable TV network and sends it to the computer via a USB interface or standard Ethernet network interface.

This scheme implies the distribution of the internet through the main modem, CMTS, to all connected users simultaneously.

DOCSIS has been used since 1998. The task of the standard is to unify the requirements for data transmission over coaxial cable and guarantee the compatibility of equipment supplied by different manufacturers.

At the moment of introduction, the technology was promising. It allowed us to carry out the internet through already existing networks and thus to reduce expenses for the creation of new infrastructure. For cable TV operators, this meant the possibility of expanding the list of services provided, and for users – inexpensive internet with rather high speed.

Now connection via DOCSIS is inferior in speed to other options of connection to the network – FTTB, PON, HCNA.

DOCSIS is divided by type of specification. The division is carried out in the order of updates with additional functions:

The differences between the types are determined by the quality of service (QoS) criteria, flow capacity, modulation, noise immunity. EuroDOCSIS – an adaptation of the standard to the European frequency grid.

The very first standard implied data transmission at a speed of no more than 42 Mbit/s, and in the opposite direction – up to 10 Mbit/s.

The asymmetry of the channel existed in the subsequent years, with the release of updates. Only in the latest version of the specification, it was possible to equalize the flow rates.

Starting with DOCSIS 3.0, the data transfer rate was increased to 1.2 Gbit/s in the forward channel and 200 Mbit/s in the reverse direction.

DOCSIS 3.0 allows you to combine the channels on a cable modem, thereby increasing access speed. Up to 16 forward and 8 reverse channels are combined. Prior to DOCSIS 3.0, the bandwidth per user in a downstream channel was approximately 25 Mbit/s; in an upstream channel, it was no more than 10 Mbit/s. It is due to the impossibility of allocating all the time slots for one subscriber device.

First introduced in October 2013, the DOCSIS 3.1 specification regulates the forward channel rate of 10 Gbps or more and the return channel rate of 1 Gbps, using a 4096 QAM modulation scheme. Here, instead of the 6 MHz and 8 MHz frequency division of channels, carrier widths from 20 kHz to 50 kHz with OFDM multiplexing are used. They can be stacked in a spectrum up to 200 MHz wide. DOCSIS 3.1 also regulates energy management tools to reduce the power consumption of the cable television industry.

The new amendment to DOCSIS 3.1 made the forward and reverse channel rates equal (full-duplex). It is increasing the return rate to ten gigabits per second thanks to sharing the entire cable frequency range (from zero MHz to 1.2 GHz) for both sending and receiving data. It allows time slots to be optimized as well.

Version 3.1 specifies the forward channel rate up to 5 Gbit/s and the reverse channel rate up to 1 Gbit/s. These values significantly exceed previous specifications. Also, the standard provides for the reduction of power consumption using power management tools. This approach makes the coaxial cable industry more economical.

Improves DOCSIS 3.1 to use the full range of cable (from 0 MHz to ~1.2 GHz) simultaneously in both directions. The standard provides multi-gigabit symmetrical services while remaining backward compatible with DOCSIS 3.1. CableLabs released the full specification in October 2017. Introduced initially as DOCSIS 3.1 Full Duplex, the new standard was subsequently renamed DOCSIS 4.0.

The upstream data rate is increased to 6 Gbit/s, which is four times the maximum upstream speed of DOCSIS 3.1.

All cable network operators have to respond to the ever-increasing demands of their customers, which is especially important in the growth of telecommuting and education sectors, and online health services. All of these areas will benefit from the introduction of DOCSIS 4.0 technology, which will bring improvements in broadband quality, commented Doug Jones, senior developer of the DOCSIS 4.0 architecture. The development of the DOCSIS 4.0 technical documentation, which is part of the so-called 10G Platform from CableLabs, began in August 2016, and the implementation of spectrum expansion was completed in September last year.

How is the Speed Divided Between Users?

DOCSIS is not a personal dedicated line. The line is divided between all users who are currently exchanging data. Therefore the value for a particular user varies widely.

DOCSIS 2.0 standard differs from 3.0 technology not only in speed but also in the possibility of combining channels. The third version, for the first time, allowed uniting channels on a cable modem. With the help of this function, it is possible to obtain higher speed values.

What is DOCSIS 4.0 Technology for A User?

This standard provides quite a high speed, and if you look ahead, with the introduction of another correction, you can receive and send data equally fast, and the technology will compete with the fiber. However, deploying new coaxial networks is expensive, plus the real speed for the user with other types of connections is higher.

On the other hand, in sparsely populated areas with private households, it will be even more expensive to deploy fiber. If you have coaxial cables, it is much cheaper to connect users to the internet through them. Even version 3.0 is capable of competing with fiber-optic networks, and 4.0 is far superior in the future. Learn why is my fiber-optic internet slow?

The Equipment of DOCSIS

There are many options for the equipment that fits this type of connection. The choice depends on the manufacturer, additional features, and a suitable price category. The offers include two-in-one devices – cable modem and WiFi.

One of the most popular manufacturers of such equipment is Netgear. In particular, they supply a WiFi router for the DOCSIS model N450. It provides quick access to the network. But other manufacturers are not inferior in quality. When choosing equipment, consult with your operator.

1 thought on “What is DOCSIS Technology and How It Works?”