Video conversion and editing can get really cumbersome with the introduction of new video technologies. The new 4K or UHD videos have four times higher resolution than 1080p full HD videos and hence they are often incompatible with a large number of older devices.

Moreover, 4K video, straight out of the camera, takes a lot of space. This can easily fill up space on your phone. In these cases, you need to convert the video into some compressed format such as H.264, commonly known as MP4 or the brand new HEVC or the High-Efficiency Video Codec that makes high-quality videos much smaller without any noticeable loss of quality. 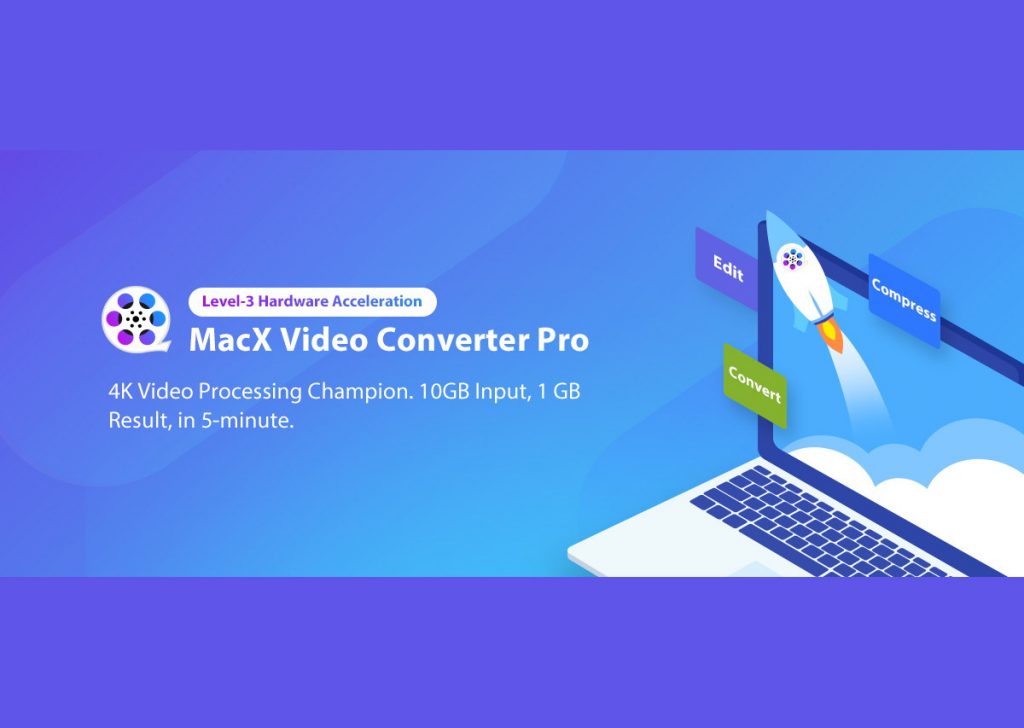 But conversion can be quite a hassle if you do not know the right settings, or if you do not have the right computer hardware. Free video converters, such as Handbrake do provide a lot of options but are quite confusing for even tech-savvy people. Especially, when you are converting a bunch of videos, there is no simple way to just add the videos and convert them in one batch.

This is where the MacX Video Converter Pro comes with, with full 4k support, as well as with the support of all codecs, old and new, including the new HEVC or the H.265 standard.

4K videos have finally hit the mainstream market. Streaming services such as YouTube or Netflix are using 4K video streaming, most phones, as well as DSLR cameras and action cameras, now have 4K recording features.

Each frame in 4K has 8 million pixels, a fourfold increase in the number of pixels that are in each frame. When you record a video of a concert or a family function, you will obviously want to use the best quality that your camera or your phone has to offer.

If you have a device that’s bought after 2016, it is very likely that the phone or camera will come with 4K recording.

4K video not only consumes a lot of space, filling your phone and cloud storage really fast, but it also makes sharing these videos really hard. You cannot share 4K videos directly to Facebook or Instagram. Facebook does not even support above 1080p. Then why waste your bandwidth uploading such a big file? YouTube supports 4K, but then again, the raw video files from your phone or camera take a long time to be uploaded. Things become much simpler when you have a video converter that can compress 4K videos.

Besides simple home videos, a lot of movies are also available in 4K Ultra HD. If you own such Blu-ray discs with 4K content and you want to rip them to your hard drive to keep a backup, then you would want to preserve the quality as much as possible while having the least file size. You can learn more about video compression

MacX Video Converter Pro is a single program that will serve all your 4K video needs plus more. It comes with a comprehensive set of video transcoding and editing tools that not only allows you to convert videos but also edit the videos that you shot with minimal effort. With MacX Video Converter Pro, you can cut out those undesirable portions of your video before you convert and upload.

MacX Video Converter Pro makes video conversion on Mac a breeze. Besides having over 370 audio and video codecs, it also offers blazing fast conversions, thanks to GPU acceleration.

It comes with both audio and video conversion support. You can edit and convert ringtones too.

Also, the program comes with a massive selection of device profiles. With up to 410 profiles, you can select a video, select a profile and start the conversion in seconds. No more messing around with confusing settings, performing trial and error conversions. Most major device manufacturers are supported. You can also find profiles for different social media sites, such as Facebook or Instagram.

A large number of profiles ensure that your videos play flawlessly on your old DVD player or uploads to Instagram in seconds without any noticeable drop in quality. With this 4K video processing tool, you can endow your video files with life and play them on any device as you like.

Conversion of video format or transcoding takes place in two steps – first, you have to decode the video from the present format, say AVC or H.264, and then encode it into a new format, say H.265.

Most video converters perform the encoding process using the GPU. However, MacX Video Converter Pro performs both the encoding and decoding process on the GPU. This makes the process 5 times faster than the competition. Converting videos from one format to another can be done in minutes and feels like a simple file copy operation.

MacX Video Converter Pro supports Intel, Nvidia, and AMD Radeon GPUs. The highly parallel architecture of GPUs enables faster conversion speeds. CPUs are generally slower at video conversion. Still MacX Video Converter Pro makes good of multiple cores in CPUs to speed up the conversion. So, if you have a new CPU that supports a lot of threads, such as the AMD Ryzen or the Intel Core-i7 processors, then your video conversion speed will be boosted a lot.

More Than Just A Converter

MacX Video Converter Pro also provides great convenience to edit video clips., no matter what format it is in. MacX Video Converter Pro allows you to trim, merge, edit, crop videos, remove black borders as well as add watermarks, subtitles, and more. You can even take a bunch of photos and make a lovely slideshow, complete with animated transitions and background music.

If you want screen capturing and video downloading, then MacX Video Converter Pro has your back too. You can directly download from YouTube or other social media sites, convert the video or extract the audio to your desired format. You can also make a screen capture, and directly edit and convert it in the bare minimum number of steps.

You can also record, convert and edit videos using the built-in camera. This allows you to record Skype or Facetime calls, or make great tutorial videos, by using screen capture too.

MacX Video Converter Pro is not just the fastest, but also the most feature-filled video conversion tool on a Mac, making it the only program you will ever need to work with videos.