As a kid, I was really obsessed with superheroes (I still am) – especially with the ones who could fly. I’m sure plenty of kids also find the ability to fly quite fascinating. Unfortunately, it is not humanly possible to defy gravity like Superman (note that he is an alien). However, becoming a pilot or an air hostess can fulfill your dream if flying is what you desire the most.

An interesting fact about superheroes: there are characters like Green Lantern (Hal Jordan), and Captain Marvel (Carol Danvers) whose alter egos are actually pilots by profession. In fact, the astronauts and cosmonauts, who are no less than any superhero, are actually pilots. If you also wish to become a pilot, here is everything you need to know.

Before you start preparing to become a pilot, you need to learn about the different classification of crews who can fly an airplane, helicopter, or other aircraft.

I am assuming you have a preference for your career as a pilot. The eligibility and the procedure for becoming a pilot can vary depending on the type of pilot you want to be. 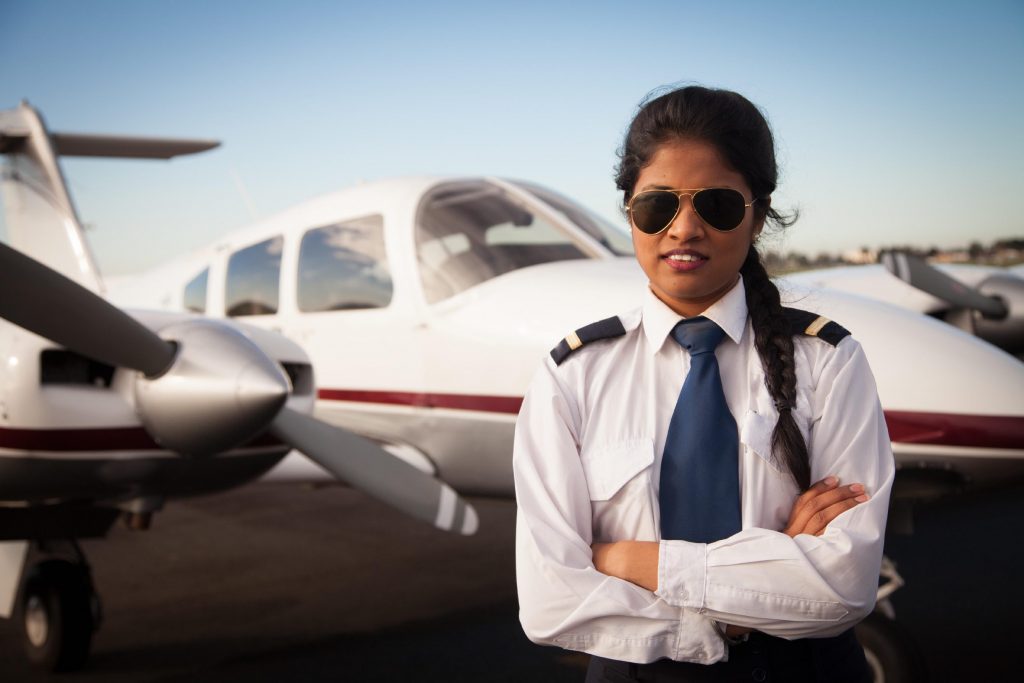 How to Become a Pilot in India?

In India, there are primarily two ways to become a full-fledged pilot and pursue aviation as a career:

In order to become a commercial pilot in India, you need to complete a three-year undergraduate course of B.Sc in Aviation. Like any other B.Sc courses, there are theory classes, assignments, and practical training sessions. This course is often confused with B.Sc (Hons) in Aviation Management, which is different from the said course.

The eligibility criteria for the course are:

The admission to B.sc in Aviation is based on merit. The admission forms of the aviation colleges are generally available during the months of May and June. You can find the application forms both online and offline on the various university websites.

A few universities require students to submit their class X mark sheet, class XII mark sheet, and other relevant certificates with their application form. The selection of the candidates for the course is mostly made based on merit. However, the colleges may also have a written test and personal interview after the selection through the merit list.

It is important to note that the minimum age to apply for a pilot license is as follows:

Now, those were the requirements for getting admission in the aviation course. However, you need to go through a number of stages to become a commercial pilot in India.

Step 1: Enroll In A Flying School

Getting admission into a B.Sc in Aviation course is not as easy as it may sound. You need to clear these following tests in order to enroll in a recognized flying school:

The written test assesses your knowledge of general English, mathematics, physics, and reasoning at 10+2 standard.

Candidates who qualify in the written test and aptitude test are then needed to go through a medical assessment conducted by the Directorate General of Civil Aviation, Government of India.

Step 2: Get Your Student Pilot License

In order to get your student pilot license, you need to appear for an entrance exam. Now, this exam includes an oral test which should be taken by either the Chief Instructor at the aviation school or a representative from Directorate General of Civil Aviation (DGCA).

This license permits you to take off flights on gliders or smaller planes that are available at the various flying clubs across the country. By the time you finish your aviation course, you should have completed a minimum of 250 flying hours. That’s when you can apply for a commercial pilot license.

It is important to mention that the course fee and other expenses of pursuing such an aviation course can be pretty high. However, you can become a pilot without paying such a higher fee is by joining the Indian Defense Forces.

To become the part of the Indian Defense Force as a pilot, you can apply either after completing 10+2 level course, or you can join the Indian Air Force after graduation. The procedures are slightly different since the academic qualifications of the candidates are different in this one. However, you get equal opportunities in both ways.

The National Defence Academy (NDA) offers you the opportunity to become a part of the Indian air force as a pilot. The selected candidates need to train for three years at the National Defence Academy, Khadakwasla. After the successful completion of their training, the candidates are commissioned as Permanent Commission Officer. Then they are posted as pilots at the Air Force Stations across the country.

The National Defence Academy (NDA) is the first opportunity that you would get, to be a part of this esteemed institute and join the flying branch. Under this entry, the selected candidates are trained for a period of 3 years, at the National Defence Academy, Khadakwasla. After the successful completion of the training, candidates are commissioned as a Permanent Commission Officer and posted as a Pilot at one of the Air Force Stations.

The Procedure of Becoming an Air Force Pilot after 12th

If you plan to join NDA after class XII, you need to qualify in the NDA entrance exam, which includes the following tests:

The written test consists of a math-based paper and a general ability test which is based on elements of English, geography, history, physics, chemistry, general knowledge, and current affairs.

The services selection board (SSB) assesses the candidates who want to join Indian Defence Forces. The interview has two stages:

Stage I: In this stage, you need to undergo an officer intelligence rating test and picture perception and discussion test.

The stakes are pretty high in this test since you can appear for this only once. If you fail to clear this test, you can never appear for the flying branch again. The test includes a written as well as a machine test to assess the candidates’ ability to read instruments, control of his actions, and mental strength.

Lastly, you need to undergo a medical examination where they will verify your eyesight, height, and weight. To qualify, your height needs to be a minimum of 152 cms with correlated weight. The eye vision needs to be 6/6 in one eye and 6/9 in other, correctable to 6/6 only for Hypermetropia.

The Eligibility Criteria for NDA Admission

You can apply for NDA right after finishing your higher secondary. The minimum age for application is 16 ½ years, while the upper limit for an applicant’s age is 19 years. Interestingly, only male candidates can apply for NDA. Also, the candidate must clear 10+2 with mathematics and physics.

Becoming a Pilot in India After Graduation

After graduation, there are several ways to get into the Indian air force and become a pilot there. In fact, graduate students can also apply for the NDA if they miss the application procedure right after their 10+2. The other procedures are mentioned below:

Combined Defence Services Examination (CDSE) is a test designed for those who want to join the Indian Air force after graduation.  The selected candidates are sent to Air Force Academy, Hyderabad, where they need to attend a pre-flying training school. After successful completion of the training, the candidates become commissioned officers and are assigned to flying units.

The Procedure of Becoming a Pilot after Graduation

Interestingly, the procedure is the same as applying for NDA, which I discussed earlier. To refresh your memory, here’s what you need to do:

Based on English, mathematics and general knowledge

II) On clearing the stage I, you will have to face psychological tests, group tasks, and a personal interview.

You get only one chance at this test, where you need to pass written and machine tests to demonstrate your ability to ability to read instruments, control of actions, and mental strength.

All the requirements for medical examination are similar to the NDA’s medical test, except the minimum height of the candidate for CDS entry is 162.5 cms.

Among other eligibility criteria, the candidate needs to be:

There’s a scheme named Short Service Commission (SSC) that allows you to join the Indian Air Force and serve there for not more than 14 years. To join IAF under this scheme, you need to qualify the Air Force Common Admission Test (AFCAT). The selected candidates are then sent to Air Force Academy, Dundigal for the 74 weeks training program.

The Procedure of becoming a Pilot through AFCAT SSC

Again, the same entrance procedure as the NDA and CDS entrances is applied for the applicants of AFCAT under SSC.

I) Officer intelligence test and picture perception and discussion test.

II) On clearing the first stage, you need to face another set of tests, including psychological tests, group tasks, and a personal interview.

You get only one shot at this. This test includes written and machine tests to assess your ability to read instruments, control of actions, and mental strength.

The requirements of the exam are the same as the medical examination of CDS that is mentioned earlier.

The other eligibility criteria for this course are as follows:

If you have been a part of the school NCC society and hold the Air Wing Senior Division “C” certificate, then you are eligible to join the Air Force through the Directorate General National Cadet Corps or through respective NCC Air Squadrons. If the candidate has secured “A” or “B” grade in their “C” certificate, he can directly appear for the SSB interview.

The Procedure of Becoming a Pilot through NCC

The procedure is the same as NDA, CDS or AFCAT, except for the fact that there is no written test.

It has the same two stages. I) Officer Intelligence test and a Picture perception and discussion test. II) On clearing the stage I, you need to face a set of tests including psychological tests, group tasks, and a personal interview.

Again, it’s once in a lifetime chance. So if you fail to qualify the pilot aptitude test, you can’t appear for this branch again. The test consists of written and mechanical tests to assess your skills on the basis of your ability to read instruments, control or actions, and mental strength.

The medical exam requirements for the candidates are the same as CDS and AFCAT medical exams.

Among the other eligibility criteria, a candidate must be:

Total Salary of an Air Force Pilot will be approximately INR 66,110 per month Only.

There’s no greater honor than serving your country as a part of its defense force. But the commercial pilots are no less. They are also responsible for thousands of lives. So, no matter which kind of pilot you choose to become, it is important to understand the responsibilities the job brings along with it. After all, “with great power comes great responsibility.”