Android by Google has emerged out to be one of the best-operating systems used by Smartphone companies so far. But, the incapability of these smartphones is seen when the performance of these devices starts degrading. It is a problem with most of the Android devices. There is a need to keep your Android Smartphone junk-free as well as update it regularly to avoid its performance from getting degraded. The DU Speed Booster is one of the outstanding apps that prove to be handy when we talk about the performance of a Smartphone.

DU Speed Booster app has been developed by DU Group that looks scrupulously towards your smartphone’s performance. It helps you out in keeping your Android phone clean and up to date. With several applauding features, this application helps the smartphone to give the desired performance level to its users. This DU Speed Booster Review will provide you with complete details about its prominent features.

Some of the exceptional features of this stunning app had been discussed here. You should have an overview of these features before using this app.

‘Network Boost’ feature helps the user in identifying networks and their type operating on the phone. The smart app interface calculates the network speed configuration along with uploading and downloading speed in the network. The ‘Boost’ option can be used by the user to kill the applications instantly that are consuming the network speed gratuitously. It even provides you complete reports about the boost percentage added. The performance of your phone is boosted ultimately. 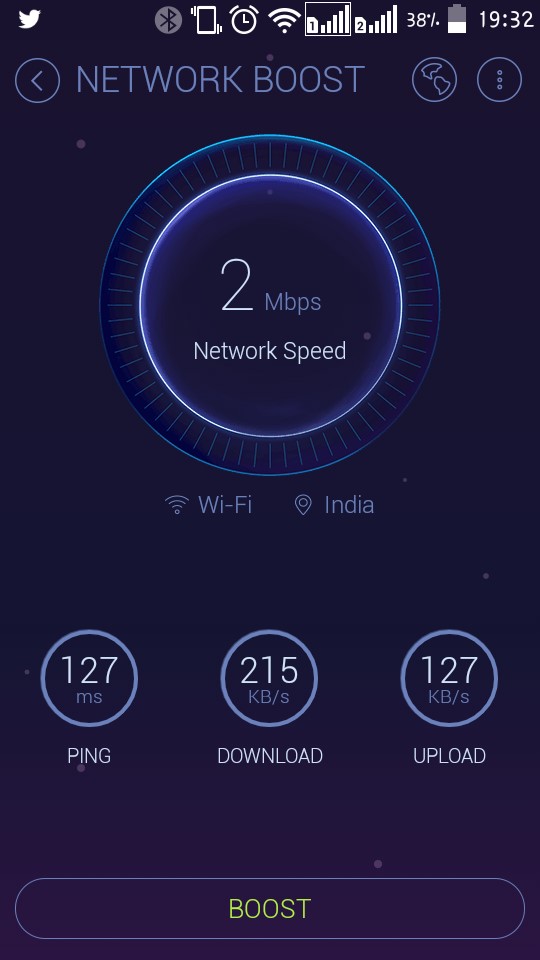 The game lovers, who want their games to run smoothly on their smartphones, can use this app. DU Speed Booster provides a feature to boost the performance of existing games on your smartphone so that each game functions slickly. Even a particular game can be boosted for performance, and you can separate the folders for different games too.

This application allows the user to detect the currently running applications on the smartphone at a particular interval of time and calculate the memory that is being used by these apps. The user can release this memory space by shutting those applications to enhance CPU performance. Shutting down these applications will result in the clearing of memory space used by them and will even remove the memory debris if any. It also helps in bringing down the temperature of your phone’s ROM by its ‘CPU Cooler’ feature. 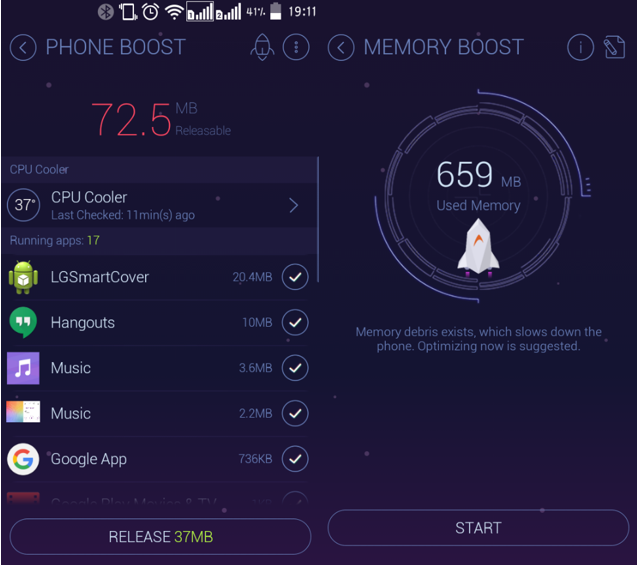 Your smartphone is secured when you are using the DU Speed Booster app. It boosts the security of your phone through features like Privacy Advisor, App Lock, and Anti Virus. The phone is secured from unauthorized use as the level of security is topmost.

The exclusive app manager of this app permits the user to manage all the apps installed on his/her smartphone. It even provides different options to install & uninstall the apps and shift the apps from internal memory to external memory of the smartphone along with the APK manager. It is a one-click feature that aids the user. 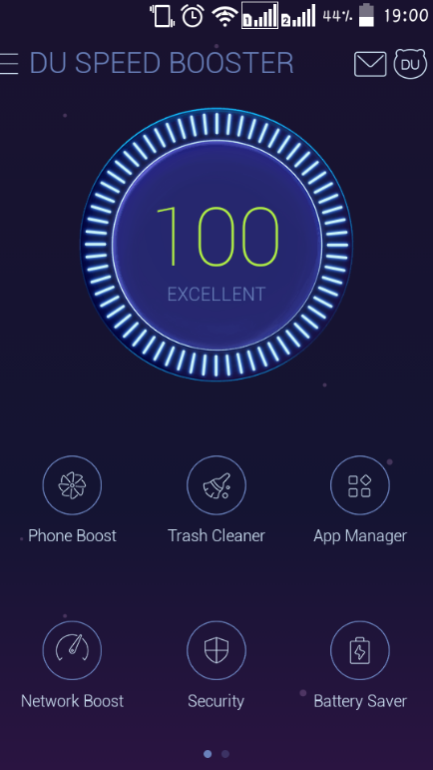 The user interface of the DU speed booster app is flamboyant enough to allow the user to operate this application fluently. The style of display icons is enough to show how this app is concerned about user security. 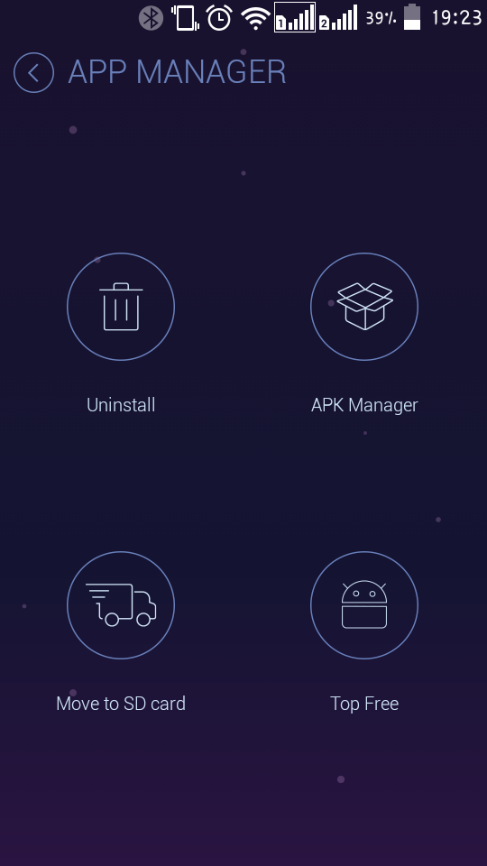 If you are worried about unwanted and useless junk on your smartphone, then the most advanced ‘Trash Clean’ feature of this app will allow you to clear it in just a single click. This feature of the app is specially designed for finding the MB’s being consumed by different apps, and then it cleans out the useless junk in a moment. The junk is categorized into Memory Trash, System Trash, and Cache Junk. It helps the user to select the junk folder which he/she wishes to delete.

While using this feature, you will notice that the scanning time is improved to 14 seconds from 20 seconds. This feature of the app optimizes the memory through termination of third party process when memory use is reached to a particular limit. It improves the performance up to 200 percent and grants memory for the successful completion of the task.

The ‘App Lock’ feature acts as a complete security tool for your smartphone. You can preserve your user data from getting into the wrong hands. Different apps and folders in the smartphone can be protected by using the App Lock feature of this app. You can even reset the passwords as many times as you wish.

Another prominent feature of this app is ‘Phone Info’. It enables the user to get precise details about the phone. Many of the users are not well aware of the minute specifications of their smartphone. This feature helps the user to discover every minute detail of his/her smartphone-like ‘Phone Signal’, ‘CPU Usage’, ‘RAM Usage’, and ‘ROM Usage’. The details about ‘Available RAM’, ‘SD Card Space’, ‘Firmware’, and ‘CPU Frequency’ can also be discovered by the users. They even get to know about the memory getting wasted on their smartphone. The added feature – ‘Hardware Details’ let the user discover information about GPU, Sensors, Screen, Storage, CPU, and more. 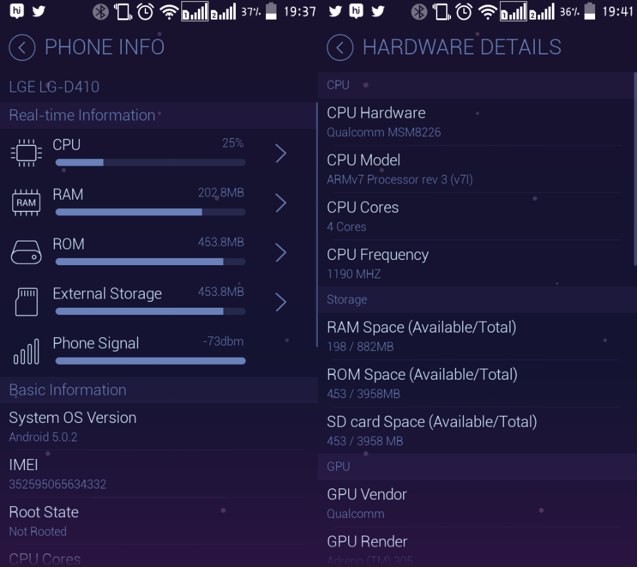 DU Speed Boost app is the ultimate solution for all the Android users facing performance issue. This app works smartly to add an extra level of exceptional performance to your smartphone. This app is highly customizable, and this enhances its usability & user experience. You can download this app easily from Google PlayStore. The performance change is easily notable, and the phone performance is improved up to 60 percent from before if you are using the app smartly.